Along with unprecedented access to Ashokan Reservoir Lands, the County Executive secured a commitment of $2.5 million from NYC DEP to make the Ulster County Rail Trail Project a reality.

Kingston, NY – Ulster County Executive Mike Hein announced a landmark agreement in principle between Ulster County and the New York City Department of Environmental Protection supporting the development of the Ulster County Rail Trail Project along the northern shores of the Ashokan Reservoir.  The County Executive was joined by NYC DEP Commissioner Carter Strickland for the announcement which establishes a framework between Ulster County and DEP to facilitate and fund the conversion of a portion of the County-owned Ulster & Delaware Railroad (U&D) corridor into a multi-use recreational rail trail open for public use year round without permits or fees.  Additionally, this concept is designed to concentrate and strengthen the historic railroad experience west of the Ashokan.  The agreement covers the11.54 miles of corridor that crosses NYC DEP lands from Basin Road in West Hurley and westward to Boiceville in the Town of Olive. 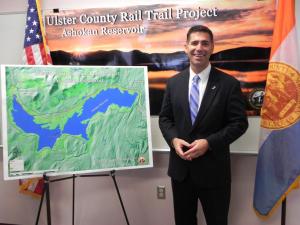 “The people of Ulster County deserve the best of both worlds.  A world class inter-connected Rail Trail System from the breathtaking Ashokan Reservoir to the wildly popular Walkway over the Hudsonand beyond as well as a well maintained historic tourism railroad attraction west of the Ashokan.  Today the people of UlsterCounty take a major step towards the best of both worlds,” said County Executive Hein.  “Today’s agreement with the NYC DEP lays the groundwork to allow everyone unimpeded access to the breathtaking views along the entire north shore of the Ashokan Reservoir from the trail, without permit or fee for the first time since the reservoir was constructed more than a century ago, and ensures that this incredible recreational resource can be enjoyed by future generations,” noted County Executive Hein.  “Ulster County is committed to expanding and connecting the current rail trail network throughout the County.  NYC’s commitment to trail development along the Ashokan Reservoir is a key advancement towards this goal, which will provide an unprecedented boost to the $475 million tourism sector of Ulster County’s economy.”

The agreement in principle will form the basis of a formal inter-municipal agreement regarding the development of theUlster County Rail Trail Project as outlined in the following provisions: 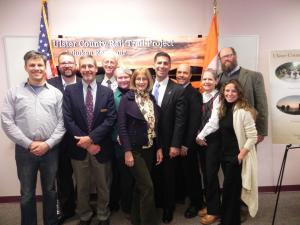 In addition to the major provisions outlined in the agreement, NYC DEP will also improve non-motorized access to the Reservoir area by providing space for pedestrian and bicycle use of the dividing weir bridge at the Ashokan Reservoir in the upcoming reconstruction project.  The entire rail trail will also be available for community organizations to use for events like charity walks and runs.

“As a railroad enthusiast and former Senior Legislative member of the Railroad Advisory Board it has become clear to me that the County Executive’s segmented plan is in the best interest of the people of Ulster County, as well as the long term success of historic railroad tourism in Ulster County and is the perfect way for rail trails and railroads to co-exist… and so I enthusiastically support this plan as well as today’s announcement,” stated Ulster County Legislator Wayne Harris.

The Ulster County Rail Trail Project as proposed by County Executive Mike Hein in his 2013 Executive Budget calls for the conversion of a portion of the County-owned U&D corridor into a multi-use recreational trail, allowing for walking, running, biking, cross country skiing, snow shoeing and other non-motorized uses, as well as dogs on leashes.  The CountyExecutive’s proposal also included the continuation and enhancement of tourism railroad operations along the U&D west of the Ashokan Reservoir, highlighting that railroad and trail uses are to be accommodated in a segmented manner to maximize public use and benefit of the County’s corridor.  The proposed plan would convert the single-track U&D corridor from Kingston to Boiceville to a recreational trail, including the lands along the Ashokan Reservoir.  The County Executive’s vision for the Ulster County Rail Trail Project previously attracted a $2 million New York State Environmental Protection Fund grant, which was included by Governor Andrew Cuomo in the 2013-2014 New York State Budget.