The County Executive Lays Out An Aggressive Agenda For 2014
Highlights Cuts in Spending, Increases In Services

Stone Ridge, NY –Ulster County Executive Mike Hein delivered his sixth annual State of the County Address at the beautiful SUNY Ulster campus to an audience filled with Ulster County residents and business owners, as well as state and local dignitaries.  The address began by the County Executive highlighting the challenges that his administration has overcome and how unique Ulster County government has become within the State of New York. 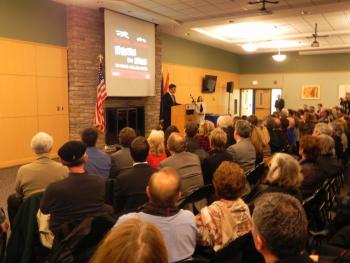 County Executive Hein said, “Over the past five years, while reinventing a $336 million dollar County government, we have designed and implemented a number of creative solutions, some of which have never been seen anywhere in New York State.  We have avoided raising taxes, cut government spending, improved our bond rating, all while ensuring essential services for the people of Ulster County.”

County Executive Hein stated that the transitional housing for local homeless veterans will be opening this year.  Hein continued by thanking the community for the outpouring of generous support for the Patriots Project including: veterans groups, service organizations, Sawyer Motors of Saugerties, Benedictine Health Foundation, the Community College, the Church Communities, Herzog’s and Benjamin Moore, the United Way and others for the generous donations, as well as the Ironworkers and tradesmen who built a handicap accessibility ramp for free.

Regarding the economy, County Executive Hein discussed a six month aggressive pilot program to assist chronically unemployed individuals which will provide Ulster County Businesses with ninety percent of gross wages for on the job training of eligible new hires.  It is designed to help people get back to work.

The County Executive added that with the overhaul of Ulster County tourism in 2009, tourism has increased 22%.

In discussing the history of the Safety Net takeover, County Executive Hein briefly addressed the “Cahill Crisis” and thanked the County’s representatives in Albany, “We have strong members of our State delegation serving with honor and distinction, and I want to thank Senator William Larkin, Senator Cecilia Tkaczyk, Assemblyman Frank Skartados, and Assemblyman Peter Lopez for all they have done, as these individuals stepped up in a bi-partisan way and limited the damage.”

County Executive Hein also applauded Governor Andrew Cuomo for his creation of the Moreland Commission in an effort to rid New York State of the epidemic of public corruption and reminded the audience that in contrast, Ulster County has become a model of good government and reform.

County Executive Hein stated that “By working together, the impossible becomes possible in Ulster County, if we are willing to put the interests of the people before the wants of the politicians.”

County Executive Hein summarized his bold visionary agenda, “…. our anti-tobacco legislation, to protect our children; our campaign finance reform, to protect our democracy; our open space program, to protect our environment; and also the $2.5 million dollar inter-municipal rail trail agreement at the Ashokan, to help protect our future.”

He continued, “Our future is bright because we live in Ulster County, the finest place anywhere to live, work and raise a family,” and he concluded by proclaiming that “Ulster County is strong …. because of you!”

To view the 2014 State of the County Presentation please visit: http://ulstercountyny.gov/executive/state-of-the-county