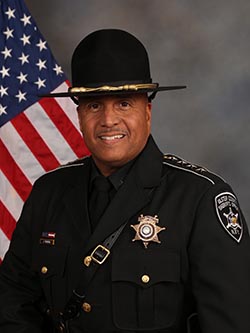 Juan Figueroa has always been moved by a sense of service to people in his community and country. Juan joined the US Marine Corps straight out of Wallkill Senior high school. Stationed in Japan, South Korea, Camp Lejeune NC, he took back with him important lessons in life: the importance of racial diversity and respect, regardless of personal differences.

After active duty with the Marines for four years, Juan served 18 years with the Marine Corps Reserve. During that time, as Chief Warrant Officer, he held primary responsibilities in Operations, aviation logistics support, budget, training, deployment, and base facilities abroad. In the early 1990s he deployed and was in charge of deploying over 150 Marines and support requirements during Operations Desert Shield and Desert Storm.

Juan became a trooper with the New York State Police in 1988, patrolling roads in Ulster County. During his 25-year career with the State Police, he assumed key leadership roles initially as a Police Academy Instructor and Field Training Officer, then as an Investigator with the Bureau of Criminal Investigation for 19 years. Juan worked on several long term investigations involving Money Laundering / narcotics and drug cartels. Investigations during his term resulted in the seizure of over $60 million in cash, 400+ kilos of drugs, and the arrest of key figures in the drug trade. Juan also was part of investigations relating to organized crime, economic crime, corruption, racketeering, extortion, identity and vehicle theft. With a distinguished career as a veteran and five years in the corporate arena, Juan brings a broad perspective to law enforcement. He believes in upholding the law while working with the community and applying proactive, innovative, and sensible approaches to the county’s most pressing issues, such as the opioid epidemic. Juan represents a brand of leadership that values fairness, compassion, respect, and the highest standards of professionalism at all levels. After many years of public service, he remains bound by an unwavering sense of duty and deep commitment to the community.

Undersheriff Benjamin has over 37 years combined law enforcement experience, 33 years of which was with the Ulster County Sheriff’s Office. During his career with the sheriff’s office, positions he held include deputy, detective, sergeant, first sergeant and lieutenant. Some of his many assignments include field training officer, rescue S.C.U.B.A. diver, T.E.D. Targeted Enforcement Detail commander, crime scene tech, narcotics investigations, criminal investigations, and F.B.I. post blast investigator. He is a NY State Police Col. Williams homicide seminar associate and a certified NYS DCJS Division of Criminal Justice services police trainer. After the events of 9/11, Undersheriff Benjamin was one of only 5 non-DCJS employee’s to teach Counter-Terrorism to law enforcement throughout New York State. Undersheriff Benjamin is also a Veteran of the United States Army. 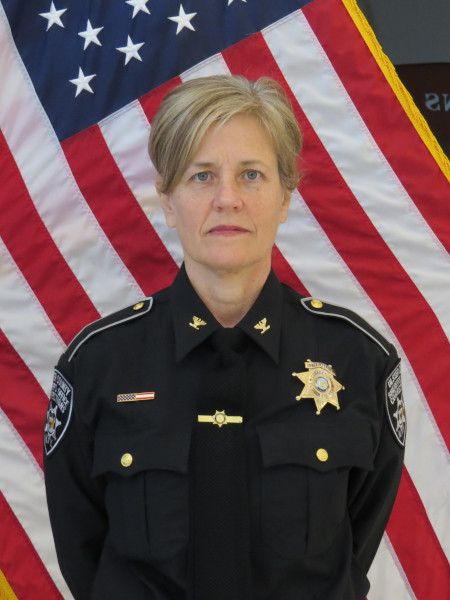 Colonel Evelyn Mallard has over 33 years of combined law enforcement experience; 30 years with the New York State Police and 3 years with the Orange County Sheriff’s Office.  She joined the New York State Police in 1986.  During her 30 years of service she attained the ranks of Sergeant, Lieutenant, Captain, and Major, retiring in 2016 as the Director of Training of the State Police Academy.  During her tenure, she was a Field Training Officer, an Academy Instructor, an EEO Counselor.  Mallard is a graduate of the FBI National Academy and the DCJS Law Enforcement Executive Institute, and holds a BA in Accounting from St. Thomas Aquinas College, and a Master’s in Public Administration from Marist College. She is also an Adjunct Professor, teaching Criminal Justice at SUNY Rockland. 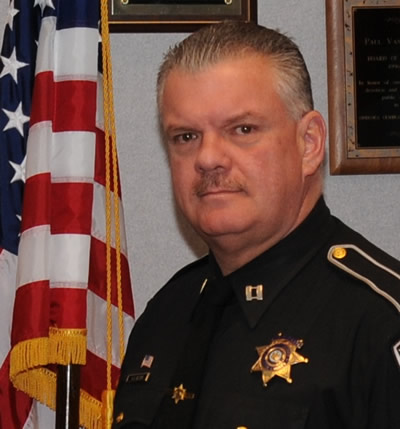 Captain Altieri joined the Sheriff's Office's Corrections Division in 1985 and was assigned to the Criminal Division in 1987. As a deputy, he served on the Sheriff's Anti-Crime and Narcotics units. As sergeant, he supervised Sheriff's Security personnel in the courts and other County buildings. During his career, Captain Altieri trained in a variety of types of investigation and supervision and is a General Topics instructor. He most recently held the rank of Lieutenant.

Jarrid E. Blades Esq. was born and raised in Ulster County. He is a Graduate of Hobart College where he was a double major in Political Science and American History. While attending Hobart College he was a member of the Football team. Jarrid is a graduate of Syracuse University College of Law where he earned a Juris Doctorate Degree. While attending law school Jarrid was a student attorney in the Disability Rights Clinic, a volunteer at Syracuse University’s Valor Day Legal Clinics for veterans and served as an Executive Editor for the Journal of Science & Technology Law. Jarrid began his legal career as an Assistant District Attorney for Monroe County, NY and later returned home to Ulster County, to serve as an Assistant District Attorney where he worked closely with the URGENT Taskforce.