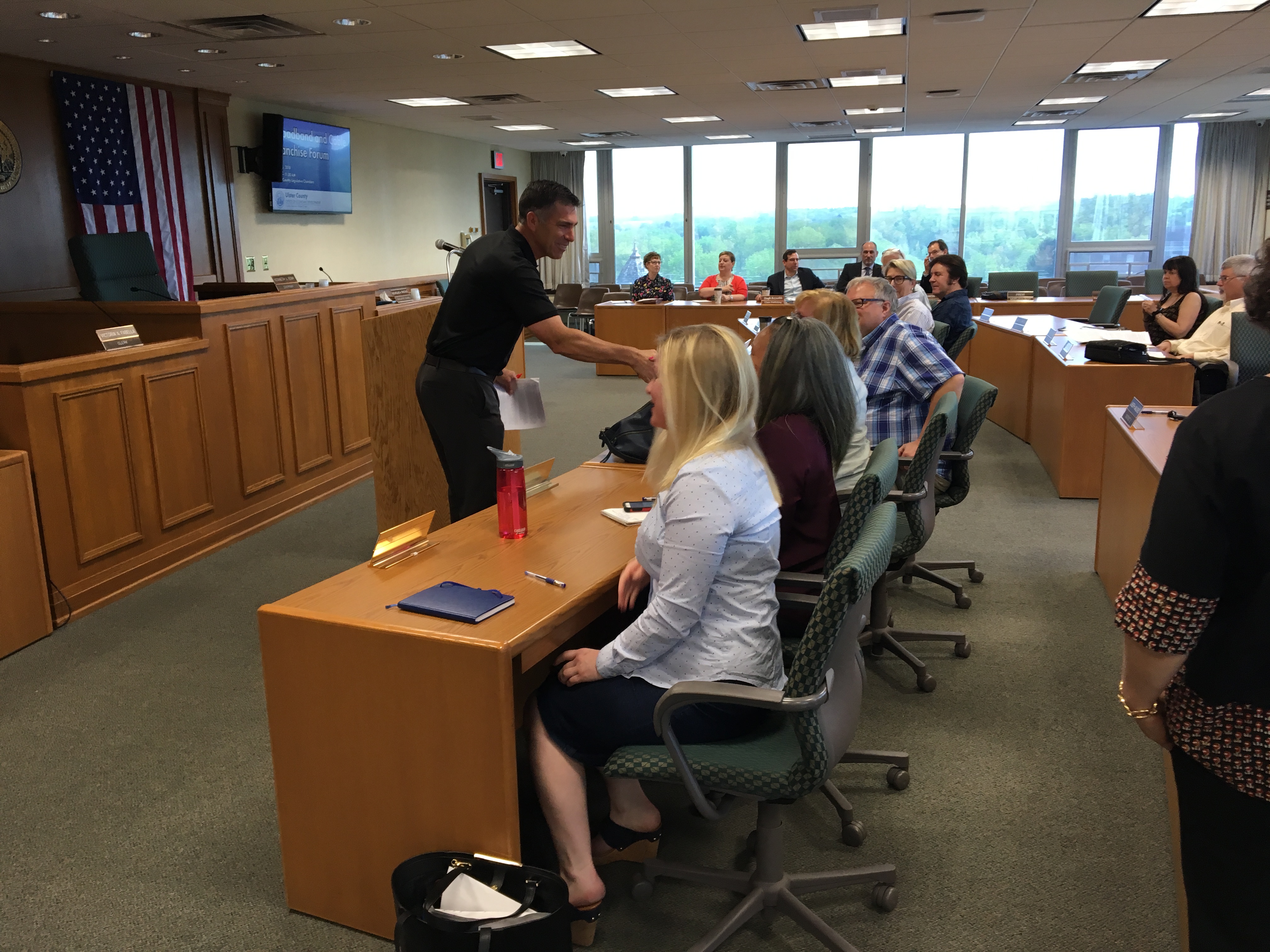 Kingston, NY – On Tuesday, May 15th Ulster County Executive Mike Hein and the Ulster County Office of Economic Development hosted local municipal leaders for a discussion on broadband internet access and cable franchise agreements. The forum featured presentations by Jeff Nordhaus, Executive Vice President for Innovation and Broadband at NYS Empire State Development and Carol McTague, Community Relations Director at the NYS Department of Public Service. In attendance were elected officials and community representatives from eleven of the County’s municipalities, as well as several county legislators.

The forum was held in response to challenges that Ulster County’s municipalities face in providing universal access to broadband, particularly in rural areas. Although the County has no direct role in the relationship between municipalities and their cable franchisees, Ulster County Executive Mike Hein shares the desire expressed by many local officials to see expanded availability of high-speed internet service.

“Just as electricity and telephone service were essential utilities of the 20th century, today broadband internet is critical to the health of our local communities and to the success of our local economies,” said Ulster County Executive Mike Hein. “I am very concerned that portions of our County are being overlooked by the cable providers, and so I’m eager to provide opportunities for our local elected officials to share their strategies and to learn how best to advance the common goal of universal access.”

“Despite commitments from Charter Communications, which is the sole provider of high-speed cable internet service in most of the County, pockets of Ulster County still lack access to internet service at speeds consistent with the State’s definition of ‘broadband,’” added County Executive Hein. “Last week, the New York State Public Service Commission announced further administrative actions against Charter’s subsidiary, Spectrum Media, for failing to meet scheduled thresholds for expansion of broadband service.”

“Our residents, businesses and visitors deserve meaningful progress, and Charter’s failure to provide the needed services are directly impacting our communities’ economic competitiveness and their general livability. To help local officials address this unmet need, we have brought together two of the state agencies tasked with accomplishing the Governor’s goal of universal broadband – Empire State Development and the Department of Public Service – to answer any and all questions that town supervisors, mayors and officials may have about increased access, speed and improved broadband connectivity for their municipalities,” said County Executive Mike Hein. “This is a meaningful opportunity for local officials to have direct access to the individuals in the state government tasked with expanding broadband access to all.”

The New NY Broadband Program--an unprecedented $500M commitment Governor Cuomo launched in 2015 to expand access to high-speed internet service--has brought broadband upgrades to over 2 million locations over the past three years. Jeffrey Nordhaus, Executive Vice President of Innovation and Broadband at Empire State Development, said, “Communication with local leaders across the state and monitoring of state-secured commitments from service providers are paramount as we drive toward our achieving the promise of Broadband for All. The Broadband Program Office is closely monitoring buildout efforts and we thank County Executive Hein and his team for the opportunity to work together on this critical effort.”