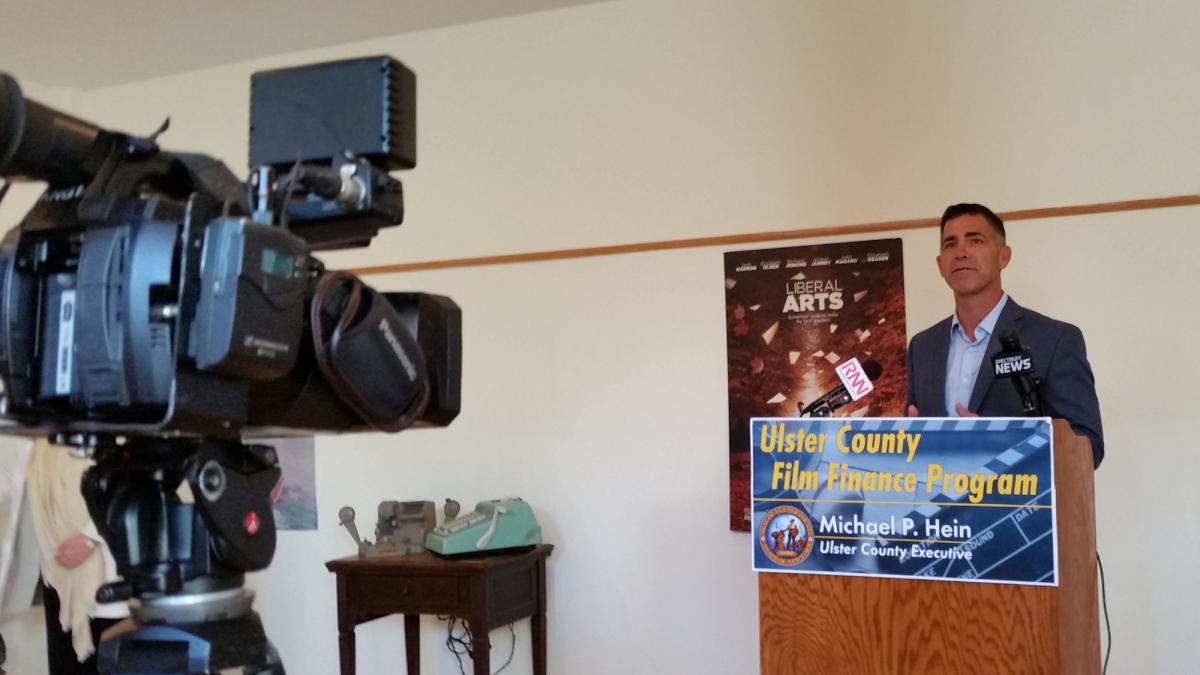 The Ulster County Film Finance Program represents an initial commitment of $8 million for 2018 by four local financial institutions. The Program benefits include,

The new Film Finance Program is made possible by the Bank of Greene County, Catskill Hudson Bank, Ulster Savings Bank, and Wallkill Valley Federal Savings & Loan and will be available to film, media and television production and post-production businesses working in Ulster County. The program will be administered by these financial institutions and promoted through the County‘s Office of Economic Development.  This Program is the result of extensive outreach with multiple film, media and television industry professionals.

“Ulster County is attracting an increasing number of film, media, and television productions and industry professionals. Our local businesses associated with the film industry are thriving. We want to build on this momentum and attract more film, media and televisions productions to choose Ulster County as their filming location. Not only that, we want to grow the local film, media and television sector and create good jobs.  This new Film Finance Program is here to do just that. Together with the NYS tax credits it will be an important driver for growing this industry right here in Ulster County.” said Mike Hein.

“Ulster County has a lot to offer to the industry: unique geographic features, picturesque locations and welcoming communities to host film productions, and three certified sound stages. We have a well-established creative community through the work of the Hudson Valley Film Commission and Woodstock Film Festival, and a growing number of experienced and aspiring industry professionals. We also see an increasing number of local film and media businesses – Markertek, BCDF Pictures, Edgeworx, Ellenbogen Media, Stockade Works to name just a few – that are thriving in the area and we want to help them succeed and grow over the long-term. For new businesses looking to locate here, we have quality post-production sites and flex-work spaces in the 721 Media Center, Tech City, and soon the Fuller Building and The Metro that offer key industry infrastructure, like broadband and high-speed dark fiber. The new Film Finance program is designed to make filming and setting up post-production businesses easier and bring more jobs to our community,” said Mike Hein.

“Ulster County has a long and distinguished history of supporting the creative arts, and it has been one of the defining cultural strengths of our region.  We are happy to do our part to support this program for the film industry and further strengthen what is already a growing segment of the local economy,” said Kevin S. McLaren. We are hopeful that this will help differentiate Ulster County as we seek to increase our share of this market.”

“BCDF Pictures is excited to work with County Executive Mike Hein and the local banks of Ulster County to continue to develop the film and TV industry in our region. More and more filmmakers are moving to Ulster County for the amazing quality of life we have and now they will be able to live and work here permanently thanks to the incentives and financing programs being put in place, said Claude Dal Farra.  “These incentives and programs will be the catalyst for sustainable production and post-production growth in the region.”

"Since the new film tax credits that County Executive Mike Hein spearheaded went into effect in November of 2016, the Hudson Valley Film Commission has seen a 50% increase in film production. It’s amazing to work in a county like Ulster that has shown such a commitment to the film and TV industry. All these new projects create opportunities for Ulster County youth and industry professionals, many of whom are moving to the region. The fact that local banks will now be offering industry focused incentives and financing will be a catalyst for further growth, additional job opportunities and regional economic development.”

“Mike Hein has been leading the charge to bring the production boom to the Hudson Valley. He has been an incredible partner to us in a multitude of ways, including working to help get increased tax incentives for the region. This is a clear example of his innovative thinking around economic development and job creation through film & television production.”

“The Film Finance Program will be a strong signal to the industry and contribute to making this area a go-to destination for productions. Growing the film and television sector is poised to provide well-paying, quality jobs for Hudson Valley residents.”

The Bank of Greene County is the only locally based community bank with office in Greene, Columbia, Albany, and Ulster counties, and has proudly served the Hudson Valley for over 125 years. See also www.tbogc.com

Catskill Hudson Bank is headquartered in Kingston, NY with over $400 Million in assets and 12 branches serving the Hudson Valley and Capital Regions. See also www.catskillhudsonbank.com

Ulster Savings Bank has been serving the diverse financial needs of the Hudson Valley for over 166 years.  An $838 million dollar community bank, Ulster Savings offers all the technological conveniences for easy banking along with a wide variety of customized financing options. See also www.ulstersavings.com