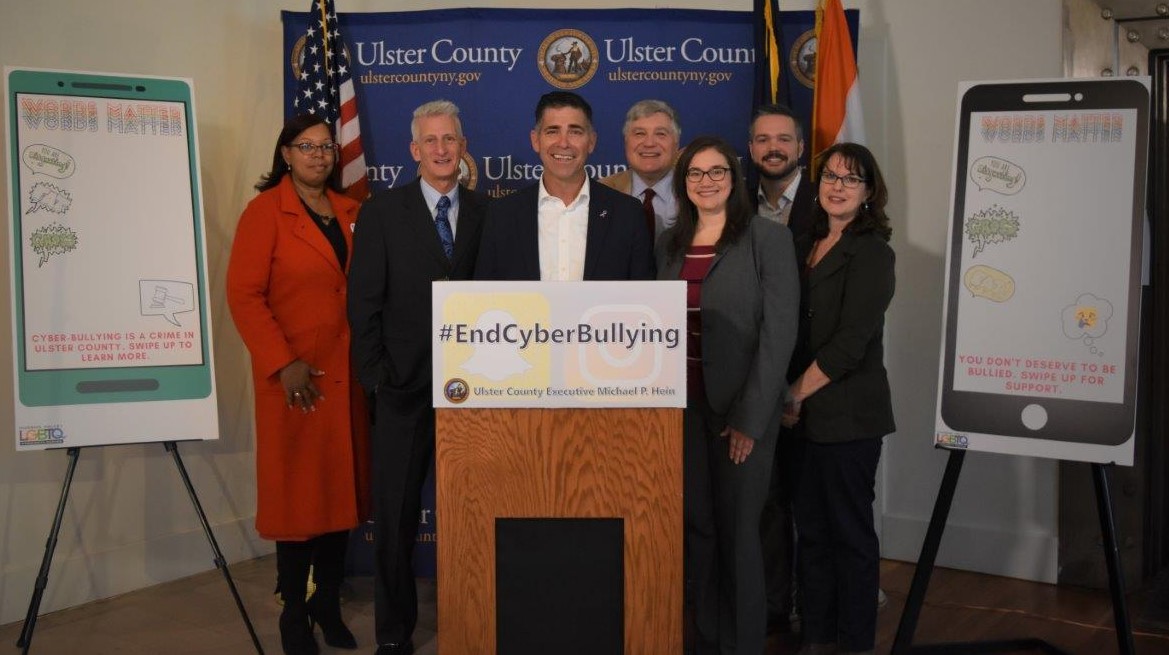 KINGSTON, N.Y. – Today, Ulster County Executive Mike Hein and the Hudson Valley LGBTQ Community Center’s Executive Director Jeff Rindler announced the launch of a new social media campaign aimed at addressing cyberbullying in Ulster County.  They were joined by members of the steering committee who assisted in the development of the campaign, consisting of representatives from the Ulster County Attorney’s Office, Ulster County Department of Mental Health, Ulster County Youth Bureau and various school districts.   The campaign, which will use the hashtag #EndCyberBullying, is a collaboration between the County Executive` and various County agencies, local school districts and coordinated by the Hudson Valley LGBTQ Community Center.

The campaign will be launched at several locations throughout the County in the coming weeks and on Snapchat and Instagram social media platforms. Utilizing Snapchat geofilters and Instagram Stories, the campaign features engaging tools to stimulate conversations among our youth about cyberbullying.  It can also link them to resources to help them intervene when they witness cyberbullying as well as receive support when they have been targeted. In addition, the campaign will help raise awareness about the Ulster County Law prohibiting cyberbullying and the restorative justice procedures in place to address acts of cyberbullying that are referred to the courts.

“We know that cyberbullying is a serious issue and can be devastating to the victim and their family, and it can lead to anxiety, depression and in severe cases suicide. Cyberbullying is a real concern with our youth and I appreciate the important efforts of the Hudson Valley LGBTQ Community Center and the Anti-Cyberbullying Steering Committee in their development of this social media campaign to help end cyberbullying,” said County Executive Mike Hein.  “Snapchat and Instagram are popular platforms used by our children and this campaign will be able get the message out to our youth that there are resources and protections available in Ulster County to help, whether they are the victim of cyberbullying or a witness.”

“According to the U.S. Department of Health and Human Services, bullying has been linked to various negative outcomes, mental health issues, substance abuse and suicide,” said Dr. Carol Smith, Ulster County Commissioner of Health and Mental Health.  “Bullying can be overcome if adults and children work together and keep lines of communication open at all times. As President Obama once said `words matter.´  I commend County Executive Hein for bringing the problem of bullying, in all its forms, to our attention and for reminding us of our responsibility to end it.”

“We are proud to celebrate the launch of this important social media campaign which combats cyberbullying where it lives – online,” said Jeff Rindler, Executive Director of the Hudson Valley LGBTQ Community Center. “This campaign will raise the standard of how we interact online and increase safety for our youth… Both incredibly timely goals, given how bullying and violence have been normalized in our nation, with often devastating results.”

A person is guilty of Cyber-Bullying of a Minor when:

With the intent to harass, abuse, intimidate, torment, or otherwise inflict emotional harm on a minor, the actor electronically transmits, anonymously or otherwise:

a. information about such minor which has no legitimate communicative purpose and the actor knows or reasonably should know that the electronic transmission of the information will cause harm to the minor’s reputation or the minor’s relationships with the minor’s parents, family members, friends, peers, employers, and school administrators and faculty; or

b. private sexual information about the minor; or

c. a photograph or a video, whether real or altered, that depicts any uncovered portion of the breasts, buttocks, or genitals of the minor and said photograph or video has no legitimate communicative purpose; or

d. false sexual information about the minor; or

e. information that has no legitimate communicative purpose by appropriating the minor’s name, likeness, e-mail accounts, websites, blogs for the purpose of harassing such minor or other minors.

In January of 2018, during Ulster County’s annual No Name Calling Week, County Executive Hein and Hudson Valley LGBTQ Community Center Executive Director Jeff Rindler announced this important anti-cyberbullying initiative that would focus on education and prevention, and would consist of  a Steering Committee to assist in the development of the programming.

STATISTICS:  According to the Cyberbullying Research Center:

•           Cyberbullying is when someone repeatedly threatens, harasses, mistreats, or makes fun of another person (on purpose) online or while using cell phones or other electronic devices.

•           12% of students admitted that they had cyberbullied others at some point in their lifetime.

Annually, County Executive Hein participates in No Name-Calling Week, a national bullying prevention week which is co-sponsored by GLSEN and the Hudson Valley LGBTQ Center in order to raise awareness of bullying and to celebrate kindness.  Over the years, the County has developed webcasts, videos for elementary and middle school students, visited school assemblies and classrooms and collaborated with other local youth groups.  In addition, Ulster County has partnered with the Voice Theatre to provide over 50 anti-bullying workshops at six high schools throughout the County, and the Don't Be A Monster Program during National Bullying Prevention Awareness Month in October. For more information please visit http://ulstercountyny.gov/executive/stop-bullying. 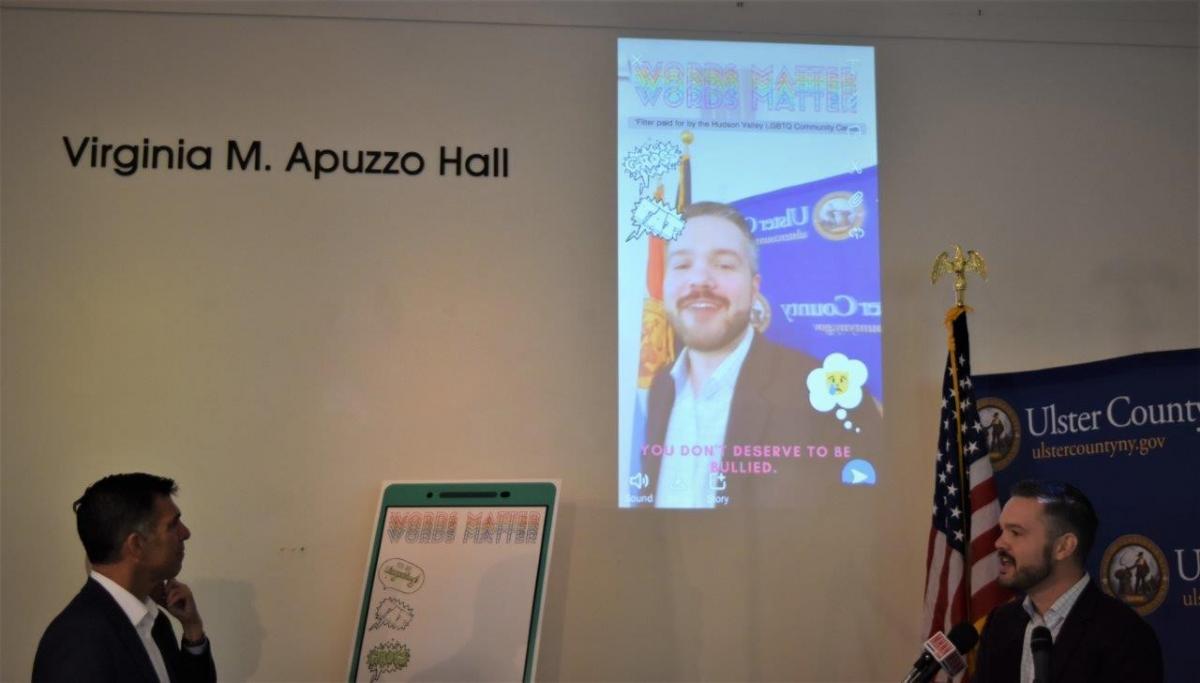