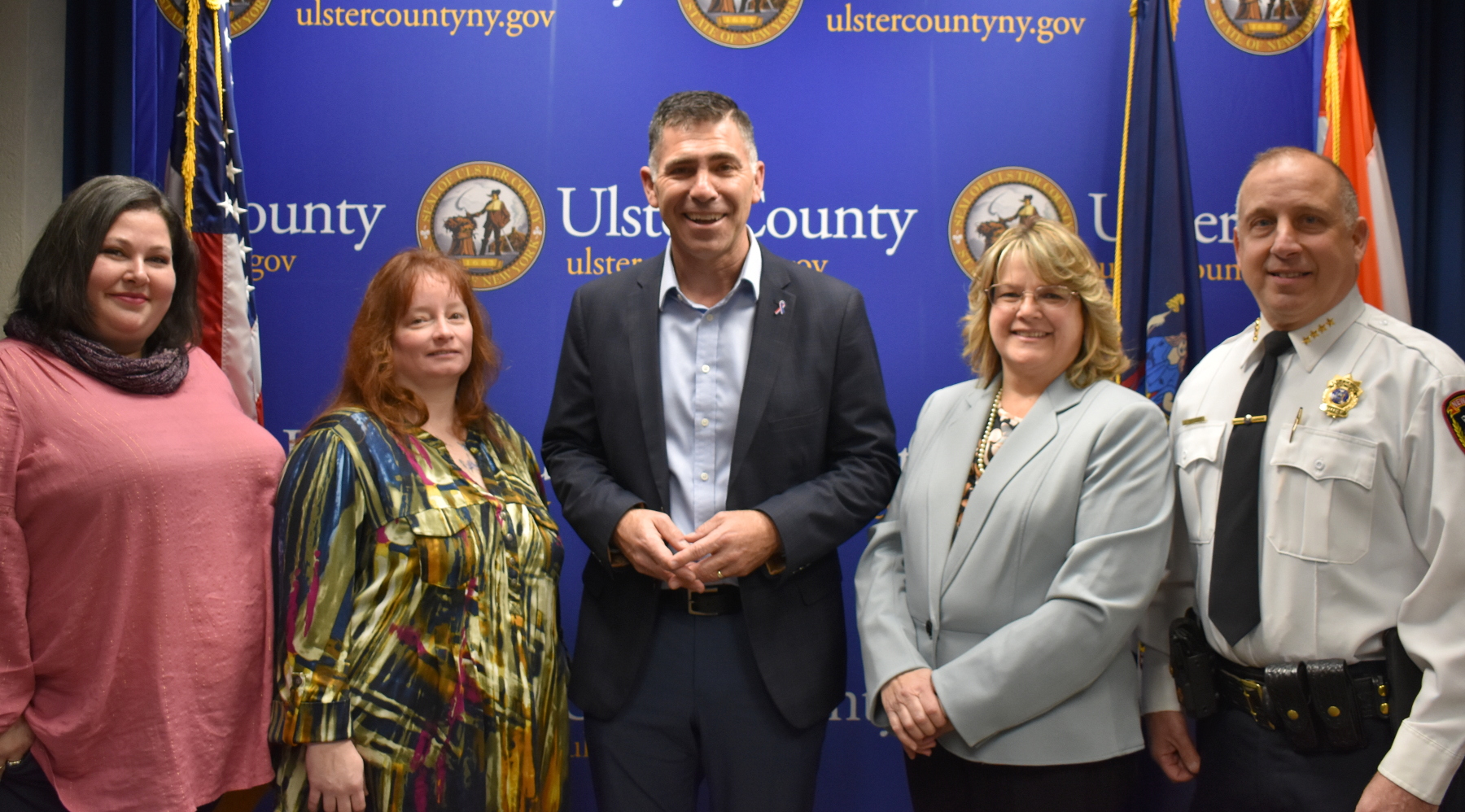 Kingston, N.Y. – County Executive Mike Hein announces a new innovative program of the Ulster County Crime Victims Assistance Program (CVAP) called the Ulster County Bystanders Against Sexual Assault (UCBASA) Program.  This ground-breaking program provides bystander training for bar staff as it aims to prevent sexual assaults before they occur and reduce the overall number of sexual assaults that take place. It is the first such program in New York State and can serve as a model for the development of a state-wide initiative.  The Ulster County CVAP has launched this program in the college town of New Paltz with the assistance of Town of New Paltz Police Chief Joseph Snyder and the New Paltz Bar and Tavern President, Mike Beck.  Currently there are three bars participating in this pilot program: P&G’s Restaurant & Bar, McGillicuddy’s Restaurant & Tap House, and Murphy’s Restaurant & Pub.  Those establishments that have completed the training will receive a certificate designed so that SUNY New Paltz students and all Ulster County residents will know that the establishment cares about this issue and the community at large.

“The Ulster County Bystanders Against Sexual Assault Program is an important preventative measure that provides an invaluable tool for bar staff to recognize the signs of someone who may be experiencing unwanted advances,” said County Executive Mike Hein.  “The UCBASA program is cutting edge in its ability to teach bar staff how and why sex offenders offend, what qualifies as sexual assault and why consent is vital.  It looks at local statistics and teaches sexual assault prevention knowledge to create a comprehensive program that meets the complex and diverse needs of training front of house staff to appropriately intervene on the behalf of their patrons.  I have directed our team to share all aspects of this program with all interested municipalities.”

“I am excited to work with the Ulster County Crime Victims Assistance Program in implementing this excellent training, Ulster County Bystanders Against Sexual Assault (UCBASA).  This is a valuable program that helps educate civilians in our community on warning signs that may lead to a person becoming a potential victim and I am pleased that County Executive Hein recognized the importance of this issue and implemented this critical initiative,” said Town of New Paltz Police Chief Joseph Snyder.  “We have invited our local Tavern Owners Association to have their staff attend this training which has been very well received by both owners and their employees that have already attended the training.”

“This is a complex issue. Alcohol only leads to sexual assault when there is someone present to commit that assault,” said Cynthia Craft, Enough is Enough Coordinator and Ulster County Crime Victims Advocate at SUNY New Paltz.  “The effects of alcohol on the brain do not only impact the victim making them a vulnerable target, but also play a role in the actions of the perpetrator. It is important that we are focusing on offender behaviors and not victim blaming. We are trying to change the culture that, knowingly or not, supports sexual assault. We want to help the bars in Ulster County to send a clear message that certain behaviors will not be tolerated and create a safe space for everyone.”

“Through the incredible support of Ulster County Executive Mike Hein, and thanks to the assistance of New Paltz Police Chief Joe Snyder and New Paltz Bar and Tavern President Mike Beck, this initiative has become a reality,” said Sarah Kramer-Harrison, M.Ed., Ulster County Crime Victims Advocate/Educator "Since the inception of this program we have learned that the New York State Department of Health is pressing for this type of training to be an initiative across the state.  In addition, other counties have shown interest in learning from us as the trail blazer on how to get a program like this up and running.”

Sexual Assault includes a wide range of victimizations, including attacks or attempted attacks generally involving unwanted sexual contact between victim and offender.  Sexual assaults may or may not involve force and include such things as grabbing or fondling.  It also includes verbal threats.  Approximately half of all sexual assault perpetrators are under the influence of alcohol at the time of the assault.