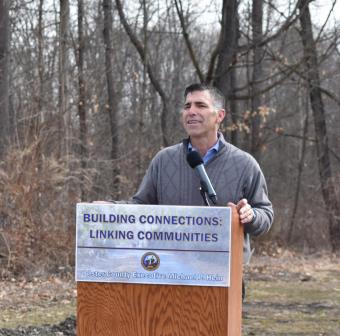 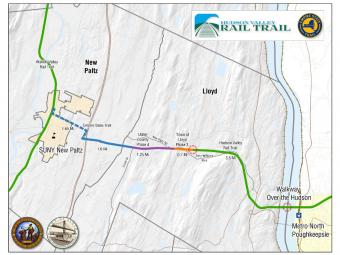 “These projects are key parts of a larger transitional plan that will connect the Walkway over the Hudson to New Paltz, Gardiner, Rosendale, Mohonk, Kingston, and beyond as part of New York’s Empire State Trail,” said County Executive Mike Hein.  “Building connections and linking communities are extraordinary benefits of having an inter-connected rail trail system.  As we begin the next phase of the Hudson Valley Rail Trail, I want to thank the Town of Lloyd for their strong partnership to assist us in making this critical connection of the trail a reality, as well as countless others who’ve supported this effort.”

“It is with great pride that I was able to participate in today’s ground-breaking ceremony for the completion of Phase 3 and 4 of the Hudson Valley Rail Trail,” said Supervisor Paul J. Hansut, Town of Lloyd.  “The dream of Ray and Claire Costantino is a reality thanks to the partnerships developed between the Town of Lloyd, Empire State Trail and Ulster County and those benefactors who have contributed financially along with the volunteers who willingly donate their time.”

The Phase 3 trail extension is being implemented by the Town of Lloyd and will extend the 3.5 miles existing rail trail by an additional 0.7 miles from Tony Williams Park to New Paltz Road across from the Highland Fire District Station #2. Ulster County is managing the Phase 4 extension which further builds the trail from the Town’s Phase 3 terminus to South Street off Route 299, adding 1.25 miles to the trail.

The Town and County’s trail extensions will increase the Hudson Valley Rail Trail to 5.5 miles and create a 12 foot wide, asphalt pave trail that is fully accessible to persons with disabilities and limited mobility. The two projects received significant federal transportation funding, which covered eighty percent of the more than $4 million trail costs. The Phase 3 project also received grant funding through Scenic Hudson, and both projects were awarded grants through Assemblyman Frank Skartados, helping to reduce the local share of the project.  The two projects are now beginning construction and will be finished by late fall of 2018.