2)         The announcement that Ulster County is the first County in New York State to become“Net Carbon Neutral,” making Ulster County among the  most environmentally friendly county governments in the United States;

3)         An unprecedented $10 million investment in County roads and bridges to address critical infrastructure and promote safety;

4)         A countywide Veterans Memorial to honor all fallen service men and women from Ulster County dating back to the American Revolution and designed by Veterans to honor Veterans;

5)         The proposal of a new initiative, known as the Ellenville Million, for the purpose of assisting the Ellenville/Wawarsing area with its longstanding challenges.

County Executive Hein said, “My administration began with the daunting task of fixing a broken $360 million government that was on the verge of bankruptcy and we did this during the largest national financial crisis since the great depression.   Ulster County is now home to the largest New York county government turnaround in generations.”  County Executive Hein continued, “County property taxes are down, County spending is down, and unemployment is down, while private sector job growth is up and there are more critical services available for our citizens than ever before.  Ulster County has moved from the brink of bankruptcy to become the most fiscally stable County government in the region according to the New York State Comptroller’s Office. We are continually reinventing County government to better serve the amazing citizens of Ulster County.   A better Ulster County is about more jobs.  It’s about lower taxes and strong infrastructure.  It’s about helping our neighbors in need and it’s about preserving our pristine environment.”

County Executive Hein stated that the County will continue to protect our environment by installing free electric vehicle charging stations for plug-in hybrid vehicles at various County locations, and the County’s sedans scheduled for replacement in 2015 will be replaced with Hybrid plug-in vehicles.  In addition, there will be a biodiesel conversion of the entire UCAT bus fleet.  In order to help further reduce the County’s impact on the environment, the County Executive asked the Legislature to join him in creating 4 megawatts of clean solar energy by establishing large scale solar projects at the former Town of Ulster landfill and SUNY Ulster.  This action is equivalent to saving 5,200 barrels of oil annually.

County Executive Hein reaffirmed his commitment to improving infrastructure by allocating $3.5 million in revenues to leverage over $10 million for infrastructure projects to repair, upgrade and replace roads and bridges.  Plans include making roads safer by widening road shoulders for pedestrian and bike use, using new geo-stabilization technology, and providing temporary co-located bridges in highly populated areas with limited detour options.

The County Executive established the Career Ladder Pilot Program for those individuals who receive public assistance or are chronically unemployed and are seeking greater opportunities.  It will fill in the gaps between Federal and State dollars and provide a hand up for those in need.

County Executive Hein announced programs to address issues such as human trafficking and child abuse, elder abuse, domestic violence and animal abuse.  The County is working with the State to address human trafficking on the local level.  The County is also providing additional resources for programs related to elder abuse and child advocacy.  Also, County Executive Hein has asked the Legislature to adopt legislation to create an Animal Abuse Registry to hold people accountable for cruelty toward animals.

To continue protecting Ulster County taxpayers, County Executive Hein committed to reducing the County property tax levy again in 2016 with the cooperation of the Legislature, as well as the establishment of a Tax Stabilization Reserve fund to further protect taxpayers.  He stressed the importance of keeping taxes low for businesses.  He also asked the Ulster County Legislature to partner with him to take action in preparing the former Ulster County jail to be “shovel ready” and placed back on the real property tax rolls.

County Executive Hein asked the Ulster County Legislature to partner with him on some important projects:

On the State level, the County Executive urged the Ulster County Legislature to focus with the entire State delegation on delivering the timely passage of a sales tax extender bill without incident.

County Executive Hein concluded “Residents should not have to choose between a fiscally responsible government and a socially responsible government.  They have every right to expect both.  We will continue to reinvent county government every single day and strive to make it better because our hard working middle class has every right to both prosper and participate in the American dream along with everyone else.  We live in the greatest nation on the face of this earth and the finest place anywhere to live, work and raise a family.  I believe it can get even better, and with your support, together we can and will build a better Ulster County today and an even greater Ulster County for generations to come.” 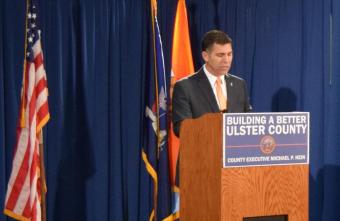 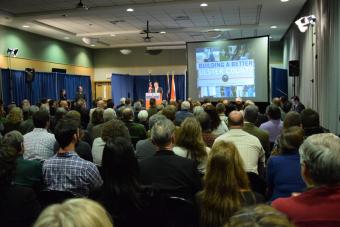