Kingston, NY — Today, Ulster County Executive Mike Hein signed an Executive Order which will restructure the County’s employment application and process, eliminating an area for potential discrimination and bias.  This action by way of Executive Order is the first of its kind among counties in the State of New York and embraces the core provision of the “Ban The Box” campaign, creating a fairer hiring process by eliminating the risk of institutional bias based upon an individual’s past history when they apply for employment.  The County will continue to do criminal background checks on qualified job applicants at a later stage in the hiring process.  This timing of the background check and the removal of an overarching question regarding convictions from the application allows applicants the opportunity to highlight their qualifications and provides the County the ability to make an individualized inquiry as to the nature, circumstances, seriousness and length of time since any past offenses occurred consistent with Equal Employment Opportunity Commission (EEOC) guidelines.

“Our nation is viewed as the land of opportunity, a country where everyone gets a fair chance to compete for a job,” said County Executive Hein. “Unfortunately, the structure of many current job applications discourages some qualified individuals from even applying for a job.  As important as this action is as a means to combat an area of discrimination, it is equally important to understand what this Executive Order does not do.  It does not mean the County Personnel Department will not do appropriate background checks on applicants prior to hiring.  Additionally, it does not mean that we will compromise, in any way, shape or form, on the high quality of the employees we select to serve the great people of Ulster County.  Today’s Executive Order does effectively ‘Ban The Box’ on Ulster County’s employment application and provides every applicant with a fair chance.  This action will help ensure that there will be an unbiased assessment of an applicant’s skillset prior to any consideration of their past record; if we are serious about fighting discrimination and bias, it is simply the right thing to do.”

"The  Executive Order issued today by the County Executive recognizes that good people sometimes make mistakes and that the existence of a criminal conviction does  not - and should not, absent more,  automatically bar an otherwise qualified individual from public employment,” said E. Michael Kavanagh, Former Ulster County District Attorney and Retired New York State Supreme Court Justice.  “Of course an individual's criminal record should - and must be considered before one is offered a position in the public employ.  And this order does just that. But it requires that any criminal conviction  and the circumstances that led up to it be viewed in the context of an individual's entire life experience and if after such a thorough review the conviction raises  legitimate concerns about an individual's honesty, integrity, trustworthiness and overall suitability for the position in question they should not - and will not be hired. The order represents a balanced and constructive approach to a difficult problem and I strongly support it."

Lisa Berger, Director of the Ulster County Office of Employment and Training

“All too often I see qualified people who are not hired or who even choose not to apply for a job because of their past histories,” said Lisa Berger, Director of the Ulster County Office of Employment and Training.  “At the very least, an applicant deserves to have his or her qualifications examined in an impartial manner and an individualized assessment of their background performed.  Many times petty offenses and even decades old minor transgressions are preventing qualified job seekers from gaining employment and providing for themselves and their families.”

“Everyone deserves a second chance, and this is a step toward providing many job applicants with a fair chance,” said Michel Berg, Executive Director of Family of Woodstock.  “Just because someone made a mistake many years ago or in their youth, should not prevent them from being qualified for a job today.  I want to commend County Executive Hein for his strong leadership in taking this courageous step forward, and for putting Ulster County in a position to hire the best, most qualified individuals who apply.”

“This is an important step in removing the potential for discriminatory practices, even if they are inadvertent, in the County’s hiring practices,” said Sheree Cross, Ulster County Personnel Director.

“It is very poignant that during this season of forgiveness, that there is also now hope delivered to job seekers who may have made mistakes in their past,” said Reverend G. Modele Clarke, Pastor of the New Progressive Baptist Church in Kingston.  “Let us start the new year by removing stigmas and doing our part to eliminate all forms of discrimination.”

By requiring an applicant to disclose if they have ever been convicted of an offense, no matter how minor, at such an early stage of the hiring process helps perpetuate the potential for structural discrimination based upon past history.  Imagine a college student who engaged in civil disobedience as a way of protesting in support of civil rights, was convicted as a result, and now that act, which occurred decades ago, is still affecting his or her ability to get a job; or someone who had a substance abuse problem years ago, fought it and won.  The federal Equal Employment Opportunity Commission (EEOC) has recommended removal of questions from preliminary employment applications that could create discrimination. 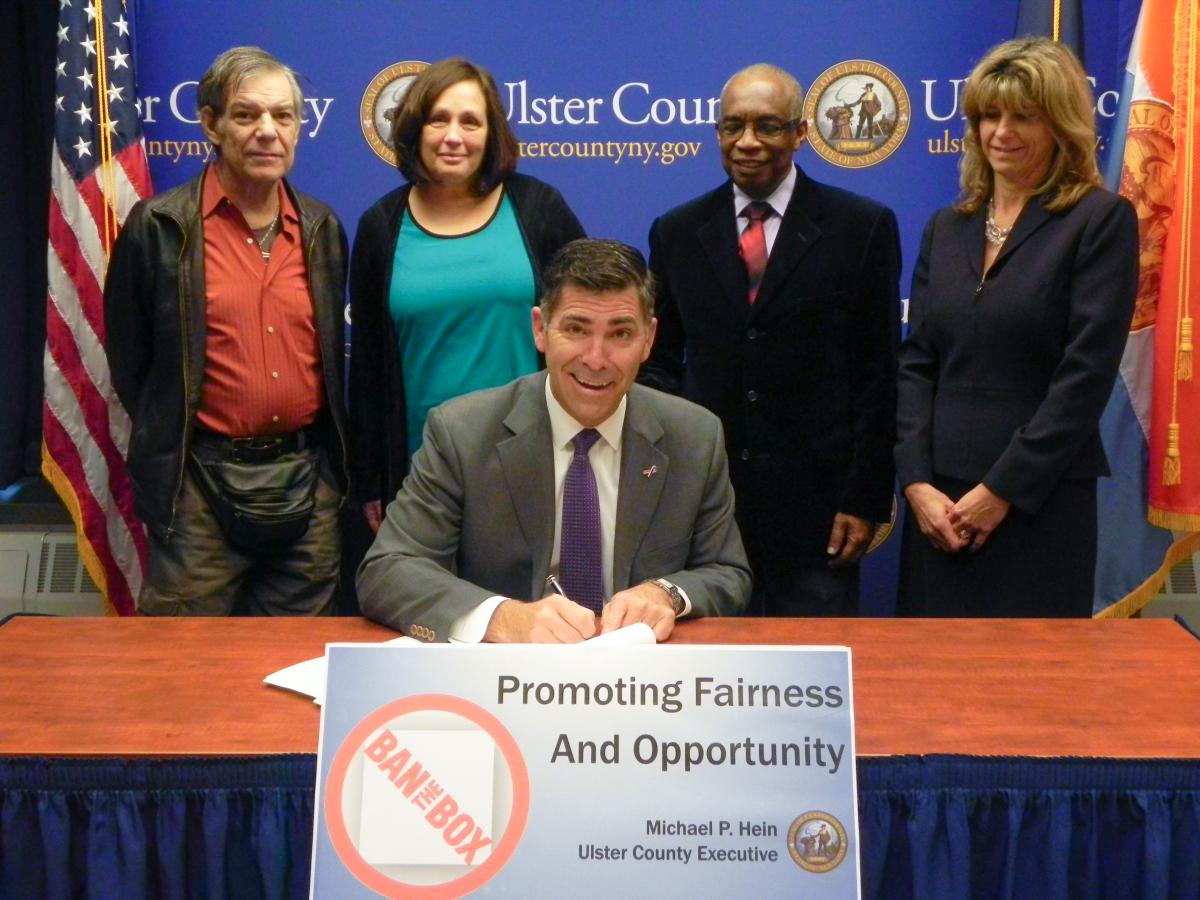