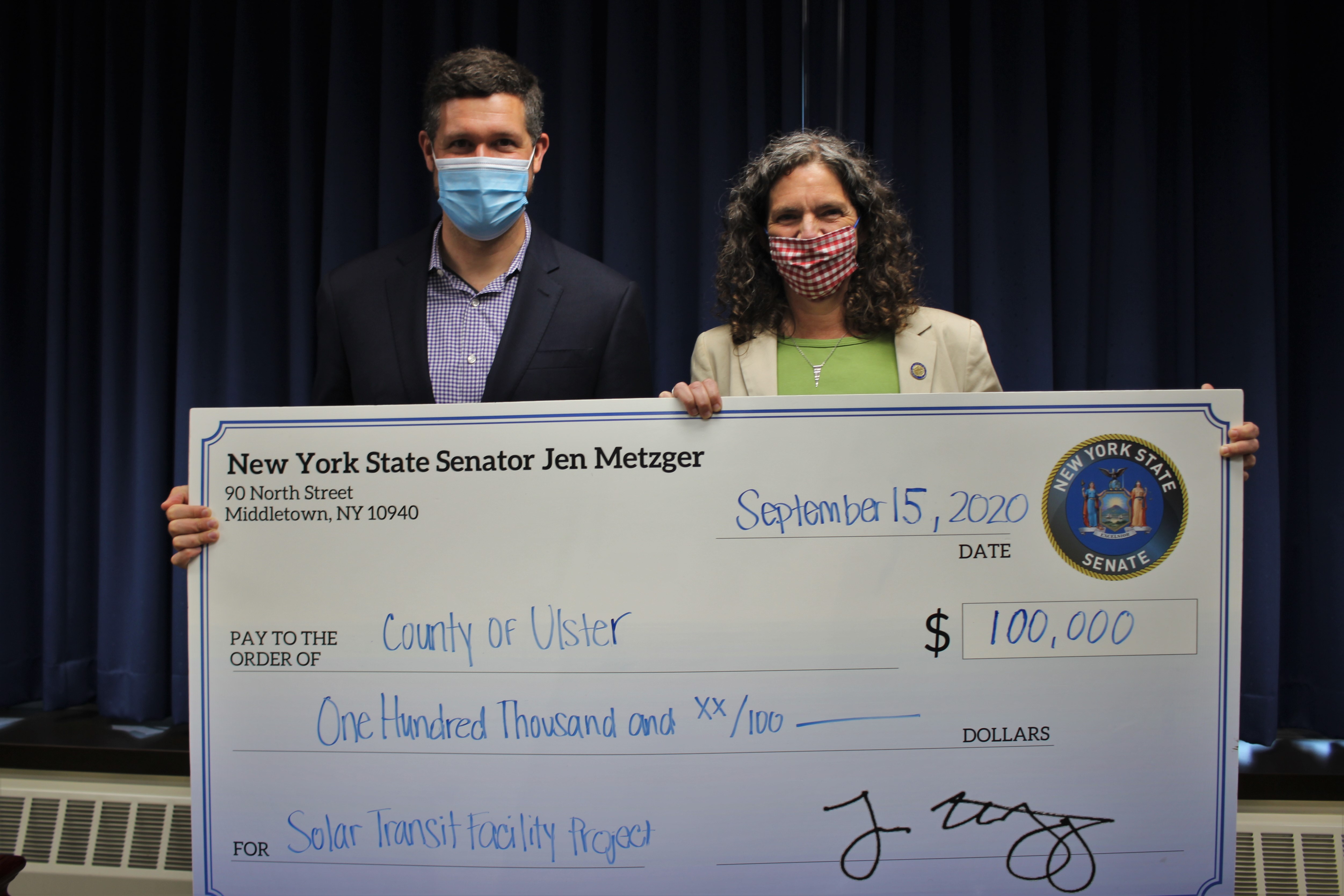 Secured by Senator Jen Metzger, this program grant funding will help the county’s overall fleet electrification initiatives and is a step towards County Executive Ryan’s goal of 100% renewable energy by 2030

KINGSTON, N.Y. – Ulster County Executive Ryan and Senator Jen Metzger (SD-42) announced today during a Facebook live briefing that Ulster County will be receiving $100,000 from a State and Municipal Facilities Capital (SAM) program grant. The grant will fund a 30kw solar array, to be installed on the roof of the UCAT transit facility, to power the facility and charging infrastructure for any electric buses to be procured. This state funding will contribute to County Executive Ryan’s goal of using 100% renewable electricity by 2030 as a part of his “Big Five” priority of a Green New Deal for Ulster County.

“This funding will help ensure that Ulster County continues to lead the way in promoting a more sustainable future through the continued investment in clean energy to power our local transportation,” County Executive Ryan said. “I would like to thank Senator Jen Metzger for securing this funding for UCAT and her strong partnership in ensuring we are aggressively tackling climate change here in Ulster County.”

“The transportation sector, alone, accounts for more than a third of New York's greenhouse gas emissions, the main cause of climate change, and a big part of the solution is investment in public transportation and zero emissions vehicles," said Senator Metzger. "Ulster County is leading the way on both fronts in its work to procure three electric buses for UC Area Transit, and I'm thrilled to partner with the County in securing $100,000 in state funding for a solar installation to power the buses with clean, renewable energy."

In July, Senator Metzger introduced a bill in the State Senate that would expand New York’s Zero-Emissions Vehicle (ZEV) program to trucks and buses—a step that was recently taken in California. The program would require manufacturers of medium- and heavy-duty trucks and buses to increase the percentage of clean vehicles they sell over time, as is done for passenger vehicles and light-duty trucks.

The CLCPA, signed into law in July 2019, requires the elimination of fossil fuel-based generation entirely by 2040, with an interim goal of meeting 70 percent of the state's electricity needs from renewable resources by 2030. Senator Metzger was an active member of the Senate's Climate workgroup that developed the CLCPA, and is a member of the Senate Environmental Conservation and Energy & Telecommunications Committees. She has been a leading proponent in the State Senate for shifting to a clean energy economy, and has introduced a package of bills to accelerate adoption of electric vehicles in New York. In December, the Governor signed into law Metzger's bill (S5820) directing the New York State Energy Research and Development Authority to identify areas across the state where EV infrastructure is insufficient and develop a plan to close the gaps.

Ulster County Area Transit (UCAT) is the primary public transit service provider in Ulster County. UCAT currently maintains a fleet of 36 vehicles which include gas, diesel, and diesel-electric hybrid vehicles. UCAT provides service on 18 routes, connecting Ulster County's towns, villages, and educational campuses to the City of Kingston and to one another.

One of County Executive Ryan’s first acts upon taking office was signing an Executive Order committing Ulster County to use 100% renewable electricity by 2030. As a part of this Executive Order, Ulster County is required to decrease greenhouse gas emissions associated with its operations (through conservation, efficiency, and on-site renewable generation) by 25% by 2025 and 80% by 2050, using the county’s 2012 greenhouse gas emission inventory as a baseline. In line with this Executive Order, the county is currently pursuing bus fleet electrification to play an important role in meeting those goals.

This project complements the county’s overall fleet electrification initiatives and the county’s larger GHG emissions reduction goals by installing a large solar array on the roof of the UCAT transit facility. This solar array would create clean energy to help power the UCAT facility and any electric buses to be procured. The roof has a large service area and is well suited to a solar installation. The proposed project to be funded by this SAM application would be a separate initiative of the bus procurement and bus charging infrastructure projects.

Yesterday, Ulster County Executive Pat Ryan announced that through initiatives outlined in the 2021 Executive Budget, Ulster County will achieve the milestone of having over 50% of its electricity produced by locally generated renewable energy sources. As part of one of County Executive Ryan’s “Big Five” priorities for a Green New Deal for Ulster County, he is committing to dedicate nearly $2.8 million to both the Department of the Environment and a series of green capital upgrades.