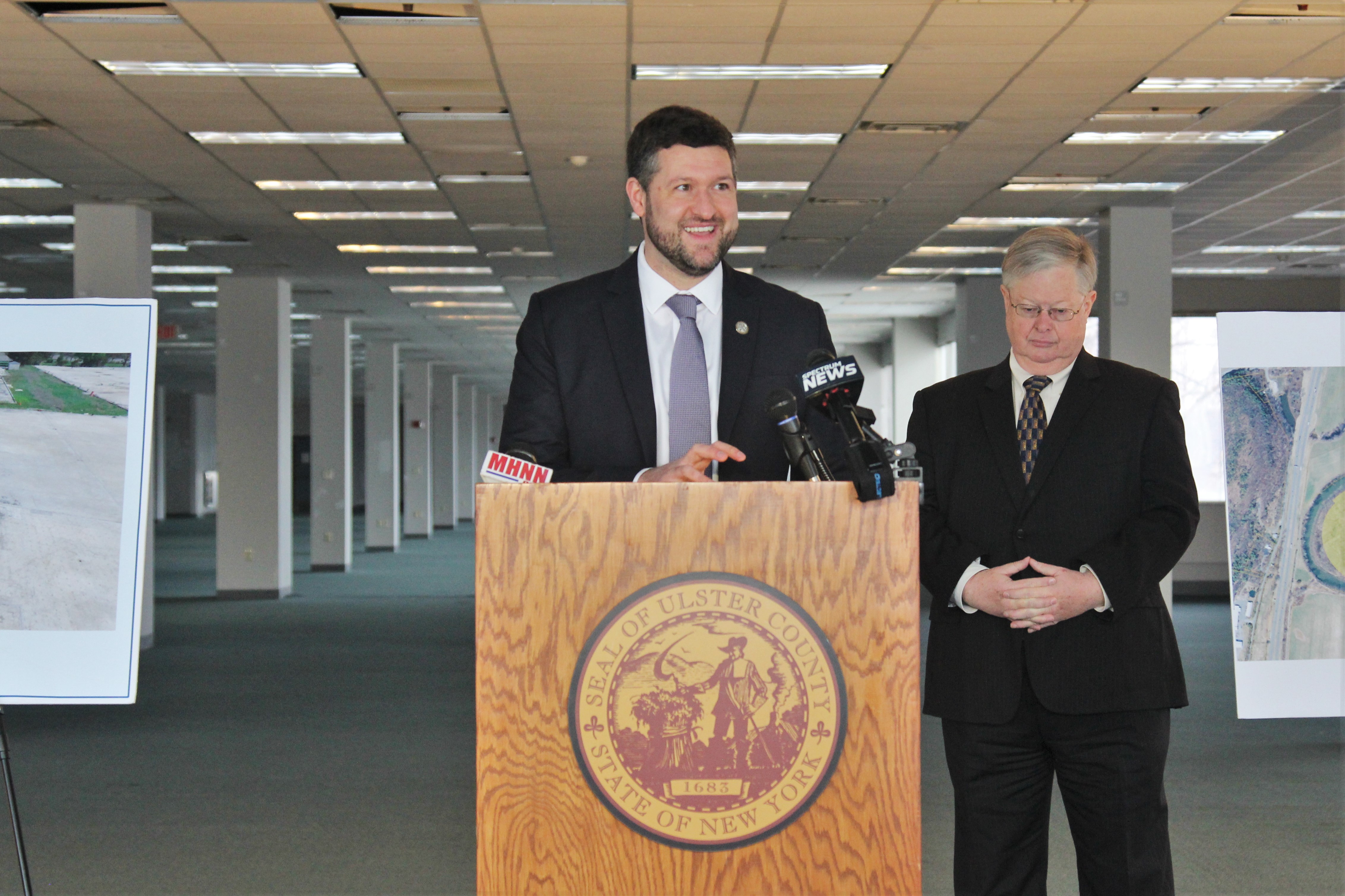 KINGSTON, N.Y. – Ulster County Executive Pat Ryan announced today that the EPA, starting as soon as next month, will begin an emergency partial cleanup of the Tech City industrial site including extensive demolition and asbestos abatement work as part of a federal action.

The work, subsequent to Ginsberg’s as yet unsatisfactory response to an EPA notice late last year that he would be liable for the proper removal and cleanup of asbestos laden demolition debris, includes EPA overseeing the complete demolition and removal of Tech City building 2, the sealing and securing of Building 1 and the sealing and securing of asbestos laden debris piles left over from the botched demolition of Building 25 in 2016.

“I want to thank EPA Administrator Peter Lopez for all of his work to hold Alan Ginsberg accountable. Today’s announcement is yet another pivotal step towards unlocking the potential of the former IBM complex. Alan Ginsberg has held Ulster County hostage for over a decade and he has made it clear that he has zero regard for the future of our community, our taxpayers, or the environment,” County Executive Pat Ryan said. “The EPA’s actions along with the continued commitment of Ulster County, the Town of Ulster, and New York State, ensures that the days of Ginsberg thwarting our economic potential are almost behind us.”

“EPA’s work at this site is a great example of the Superfund program working as intended,” said EPA Regional Administrator Pete Lopez. “EPA is advancing its work to address the more immediate threats, while continuing its efforts to ensure that the property owner and operator permanently address the remaining asbestos hazards, including the piles.”

“When toxins threaten our environment and the safety of our communities, it is the job of the EPA to lead remediation efforts while holding responsible parties accountable,” said Rep. Antonio Delgado, NY-19. “That is exactly what we’re seeing in Tech City, and I applaud this decision by the EPA and local officials which is a step forward in restoring this area. Moving forward, I will fight to secure additional federal supports and resources needed to complete this project. I will work alongside Ulster County Executive Pat Ryan, Ulster Supervisor Jim Quigley, local leaders and community partners to ensure that this site can help grow our economy.”

Ginsberg has thus far failed to satisfactorily respond to EPA’s December notice that he is personally responsible, under federal Superfund law, for the proper removal and cleanup of asbestos laden demolition debris piles throughout the former IBM complex in the Town of Ulster.

The EPA’s “Notice of Potential Liability and Request to Perform Response Action” was a first step in potential federal enforcement actions against Ginsberg, his affiliated companies, and Newburgh’s A2 Environmental Solutions, which Ginsberg contracted with in 2015 to perform asbestos demolition and cleanup work. It gave Ginsberg and all other parties until December 30 to provide notice whether they will “voluntarily finance and/or perform the work necessary to both temporarily and permanently address the release or threat of release of asbestos” in Tech City buildings 1 and 2, as well as the large asbestos laden rubble piles left behind from the demolition of building 25. The notice also demanded the proper removal of the large demolition debris piles, work cumulatively estimated to be in the millions of dollars.

Ginsberg and the others have thus far failed to satisfactorily respond to EPA’s December 2019 notice that they are potentially responsible, under federal law, for the proper removal and cleanup of asbestos-laden areas of the former IBM complex in the Town of Ulster.

“I am relieved to see that there is action being taken on the most valuable asset in our community,” said Ulster County Legislator Brian Cahill. “My neighbors and I have held out hope for two decades that this important parcel would make the turn and again become the once bustling economy boosting engine that it can be.  This is a very positive step in the right direction.  County Executive Pat Ryan is showing the kind of leadership and initiative it will take, working with the county legislature, to create a solid economic base for the future of Ulster.”

“After much effort by County Executive Ryan and myself, the EPA action we are announcing today is a ray of sunshine through the clouds of pessimism,” said Town of Ulster Supervisor Jim Quigley. “A first step in a renewed effort to clean up and move the redevelopment of TechCity forward.”

Ginsberg’s companies, meanwhile, also owe more than $12 million in back school and property taxes on the entire Tech City complex.

In November, Ulster County Executive Pat Ryan announced an Ulster County Court judgment in a proceeding against Tech City developer Alan Ginsberg that granted the county ownership through foreclosure of two large parcels at the long-dormant site, including all of the buildings formerly used by Bank of America in the western portion of the industrial campus formerly occupied by IBM.

In December, Ulster County Executive Pat Ryan announced a backup county assistance package, working with the Town of Ulster government, Empire State Development and utility Central Hudson, saving more than 140 jobs and 14 businesses from shutting down following the inaction of the Tech City landlord and the imminent threat of electric utility shutoff to the entire site.