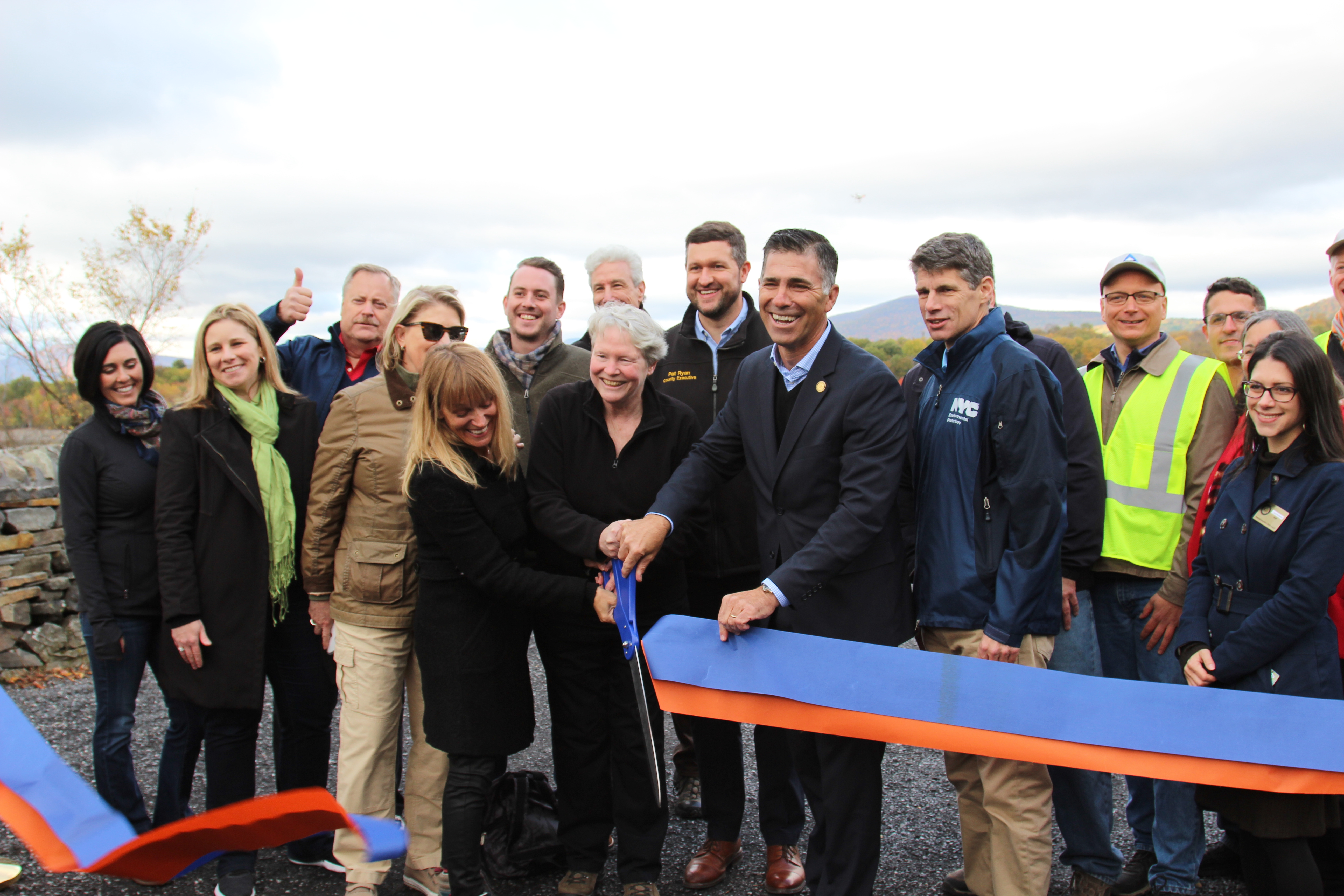 WEST HURLEY, N.Y. – County Executive Pat Ryan kicked off the opening of the Ashokan Rail Trail today. The Ashokan Rail Trail (ART) is an 11.5-mile recreational trail extending from Basin Road in West Hurley to Route 28A in Boiceville. The $16.5 million project follows the alignment of the former Ulster and Delaware Railroad Corridor and opens this County-owned right-of-way to the public without access permits for the first time since the Reservoir was constructed over a century ago.

“I am thrilled to open this trail and make this treasure accessible to the public for the first time in over 100 years,” said County Executive Ryan. “This strategic investment positions us to bolster our reputation as one of the most trail-friendly counties in New York State and accelerate economic growth linked to our expanding tourism industry.”

The Ashokan Rail Trail was planned and constructed by Ulster County through an historic partnership with the New York City Department of Environmental Protection (“DEP”), which owns and operates Ashokan Reservoir and adjacent watershed lands. In addition to funding from the DEP, the Ashokan Rail Trail was also made possible through funding from Ulster County, the New York State Department of Environmental Conservation (EPF and WQIP grants), the New York State Office of Parks, Recreation and Historic Preservation, and the Federal Emergency Management Agency.

“I am thrilled to join the County Executive in welcoming Ulster County residents and visitors to the Ashokan Rail Trail. Today represents the culmination of a shared vision, a historic partnership and a lot of hard work,” said Ulster County Legislative Chairwoman Tracey Bartels. “For the first time in more than 100 years, the public will have ready access to this truly magnificent treasure now transformed into a recreational resource.  I want to thank our partners at the New York City Department of Environmental Protection, Governor Cuomo, Former Executive Mike Hein, Deputy Director of Planning Christopher White and my colleagues in the Legislature for their commitment to this important collaboration.”

“The Ashokan Rail Trail provides outstanding views of the Ashokan Reservoir and the surrounding Catskill Mountains in a setting that allows for plentiful outdoor opportunities for residents and visitors alike,” said DEC Commissioner Basil Seggos. “The trail complements the more ambitious hiking activities in the Catskill high peaks by providing an alternate destination that is both scenic and accessible to people of all abilities. DEC is proud to be a partner with Ulster County in this project, providing more than $3.6 million from the state’s Environmental Protection Fund and Water Quality Improvement Program to make this Rail Trail a reality.”

“State Parks is pleased to support this important project, which provides the first unfettered public access to the incredibly scenic northern shores of the reservoir in more than a century. It will also be a key component of an interconnected rail trail system linking the Walkway Over the Hudson State Historic Park to the Catskill Park,” said State Parks Commissioner Erik Kulleseid. “The Ashokan Rail Trail is truly a world-class recreational trail.”

“Through a unique partnership between New York City and Ulster County, we have successfully built one of the most beautiful and enviro-friendly rail trails in the world,” DEP Commissioner Vincent Sapienza said. “The Ashokan Rail Trail provides our watershed neighbors and visitors with easy access to the great outdoors, and an up-close setting to learn about the reservoir system that provides wholesome drinking water to 9.6 million New Yorkers. The trail also extends the DEP’s commitment to expand recreation and improve public access to its water supply lands. The Ashokan Rail Trail is the 16th recreation path developed on City-owned property in the watershed by collaborating with local governments and nonprofits. These trails – including our latest effort with Ulster County – advance our common goals of supporting tourism, improving public health, and promoting a steadfast appreciation for our region’s scenic beauty and natural resources. We look forward to working with County Executive Pat Ryan and our Catskills neighbors on these efforts in the future.”

Ashokan Reservoir was the first of six reservoirs built by New York City in the Catskills. It was constructed between 1908-1915. It began providing drinking water to all five boroughs of New York City in 1917. About 40 percent of New York City’s drinking water comes from Ashokan Reservoir on a typical day. That water is conveyed to the City through the 92-mile Catskill Aqueduct. Along the way, the aqueduct also provides water to more than a dozen communities in the Hudson Valley, including High Falls and New Paltz in Ulster County. New York City’s reservoirs, dams and aqueducts comprise the largest municipal water supply system in the United States.

The Ashokan Rail Trail is 10 to 12 feet wide with a compacted crushed stone surface that is ADA compliant and is fully accessible to persons with disabilities. The Ashokan Rail Trail is open for non-motorized uses, including hiking, bicycling, running, nature observation, cross-country skiing, and snowshoeing and offers three large public trailheads from which the trail can be accessed.

“I am thrilled to be a part of bringing this trail to the public, including those with mobility challenges, and I look forward to using it with other residents of Ulster County and welcoming visitors from across New York State and beyond,” said Ulster County Legislator Kathy Nolan. “Thank you to all the community leaders and to the thousands of volunteers who have worked together to create this incredible new way to appreciate and protect the Ashokan Reservoir!"

“A rail trail through the Ashokan Reservoir scenic northern shore lands has been part of Woodstock Land Conservancy’s strategic vision and advocacy efforts for almost ten years,” said Kevin Smith, Chair of the Friends of the Catskill Mountain RailTrail. “On behalf of our hundreds of Ashokan Rail Trail supporters, we congratulate and express our deepest gratitude for the steadfast commitment and leadership in making this rail trail a reality by Ulster County Executive Pat Ryan, current and past Ulster County Legislature members, and our many partners across all sectors.”

The Ashokan Rail Trail project received a critical boost in the early planning stages through a Feasibility Study that was privately funded by the Open Space Institute, The Dyson Foundation, the Woodstock Land Conservancy, and several private donors. The County is also now partnering with the Woodstock Land Conservancy and the New York-New Jersey Trail Conference to recruit and manage volunteer “Trail Stewards” who will help ensure the trail is used responsibly and well-maintained.

The Ashokan Rail Trail is open from sunrise to sunset throughout the year. Today’s event opens the vast majority of the trail to the public (9 miles). The remaining 2.5 miles of the trail are expected to open to the public before the end of the year.