The proposed new transit routes were developed using ridership data from the City and on-bus ridership counts collected by a consultant, as well as paper and online surveys widely distributed throughout the CitiBus service area. In addition, all major destinations were mapped along with current routes, including those of UCAT. The goals were to:

• Provide service to all major destinations in the City and critical points beyond;

• Reduce time it takes to travel along major corridors within the City (“headway”);

• Consider new hubs to make connections with the new routes and the existing UCAT service; and

• Provide a way to reach low ridership or remote areas of the City not covered by fixed route service.

The proposed transit routes address each of these goals, providing connectivity to key residential locations, commercial corridors and public services within the City while reducing major redundancies between existing CitiBus and UCAT routes. The proposed transit service will reconfigure all of the existing CitiBus A, B and C routes, as well as provide new integrated Saturday routes. To supplement the newly proposed transit service in low ridership areas, Demand Response zones were established (shown shaded in the light green areas). The new weekday routes will be rebranded and known as the Red, Blue, and Yellow routes.

The Weekday “Red Route” runs from the Kingston Plaza to the Golden Hill Complexes and on to the Law Enforcement Center via Clinton and Greenkill Avenues, and the Boulevard, and return via Wall St., N. Front St. and Frog Alley and Schwenk Dr.  Trailways connection is available at Frog Ally. The route has an estimate travel time of 15 minutes each way.

The Weekday “Blue Route” route starting at the Kingston Plaza provides service along Broadway. This route makes stops at key areas including Benedictine Hospital, SUNY Ulster Satellite Campus, Yosman Towers, Wurts/Spring Streets,River Front, Rondout Gardens, and reverses back to the Plaza. This route is estimated to have a travel time of 15 minutes each way.

The Weekday “Yellow Route” runs southeast servicing the Department of Social Services, Colonial Gardens, Stuyvestant Charter, Kingston Hospital to Port Ewen with the turnaround at the PE Birches Complex. The route will also offer connection to the Blue route on Jensen Ave.    This route is estimated to have a travel time of 20 minutes each way.

The Saturday Routes will be provided by 2 buses and offer alternating services between the Red and Blue Route. The Yellow Route will alternate service between the Mall Area and the Kingston Point Park.

The UCAT expansion of service into the City of Kingston will provide riders with:

• Smoother connections at the Kingston Plaza

• Dispatch availability during all operating hours of service

For more information contact Carol Hargrove via email at char[at]co.ulster.ny[dot]us or by phone at (845) 340-3335 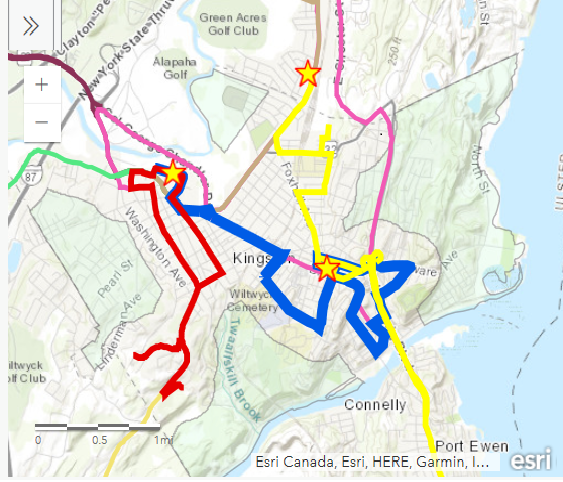