In the autumn of 2018 and spring of 2019, the longtime goal of connecting the Hudson Valley Rail Trail (“HVRT”) and the Walkway Over the Hudson westward to the Wallkill Valley Rail Trail and Town of New Paltz moved from feasibility studies and construction plans to completed projects thanks to a historic partnership between the Town of Lloyd, Ulster County, New York State, and the HVRT Association completing three trail extension projects. The HVRT was lengthened from 3.5-miles to 7-miles of paved, shared-use trail (non-motorized only) with an additional 1.5-mile on-road segment connecting to the Wallkill Valley Rail Trail (please see map in Figure 1.) 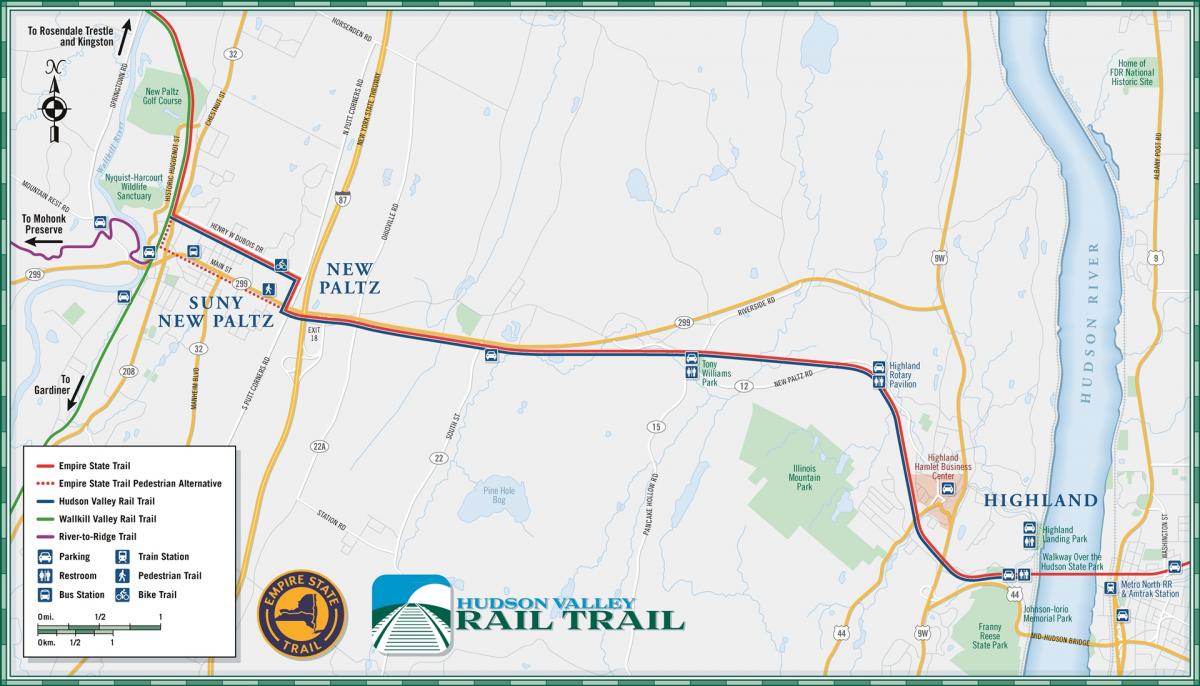 In addition to connecting Ulster County’s growing rail trail network, the recent extensions of the HVRT set the stage for the grand opening in 2020 of the Empire State Trail, a 750-mile long connected trail network stretching from Manhattan north to the tip of Lake Champlain (including a large segment in Ulster County) and from Albany westward to Buffalo. The Empire State Trail runs along the east side of the Hudson River but crosses into Ulster County at the Walkway Over the Hudson, following the HVRT westward to New Paltz and then following the Wallkill Valley Rail Trail northward to the City of Kingston, where the trail will be extended through Kingston in 2020.

The Town of Lloyd officially opened its “Phase 3” project on November 8, 2018, which extended the HVRT 0.7-miles westward from Tony Williams Park to New Paltz Road (across from the Highland Fire District Station 2). The $1.6 million project was 80 percent funded through federal transportation grants and also benefited from a $50,000 grant obtained by the late Assemblyman Frank Skartados, as well as a generous $100,000 contribution from Scenic Hudson to reduce the Town’s cost share. Town Supervisor Paul Hansut and Kate Jonietz were instrumental in keeping the project moving through the design and construction process.

Ulster County officially opened its “Phase 4” project on September 21, 2018, which extended the HVRT from New Paltz Road westward to South Street (across from Lowe’s.) The $1.9 million project was also 80 percent funded through federal funding and also received a $50,000 grant from the late Assemblyman Frank Skartados.

In May 2019, the NYS Department of Transportation substantially completed, and unofficially opened to the public, the final segment of the HVRT from South Street to North Putt Corners Road in New Paltz. This historic $5.1 million extension project was made possible in part due to the Town of Lloyd and County working together to successfully advance and complete the prior two phases and to Governor Andrew Cuomo’s Empire State Trail initiative. Final completion of this phase is expected by summer 2019 although the trail is open for public use.

The final segment connects the HVRT to Henry W. Dubois Avenue off N. Putt Corners Road, and New York State recently awarded the Town of New Paltz $2.2 million to add buffered bicycle and pedestrian lanes to Henry W. Dubois Drive, improving one of the last “on road” sections of the Empire State Trail in Ulster County. The Town of Lloyd also received a grant of $673,000 to construct pedestrian enhancements connecting the Highland hamlet with the Empire State Trail and is slated to repave a segment of the original rail trail in the fall of 2019.

The final connection of the HVRT to New Paltz and the State’s decision to route the Empire State Trail along the HVRT (resulting in millions of dollars in additional funding) is the culmination of more than two decades of hard work and leadership in steadily building and extending the HVRT.